Tina Dahley was forced to deny she was pregnant after fans speculated about her appearance following a recent episode of the BBC’s Breakfast Show – 18 months after giving birth.

The presenter, 41, took to Instagram on Friday to discuss the ordeal saying “her body didn’t bounce back right away” as she defiantly said: “The answer is no, I’m not expecting a second baby!”

Tina welcomed a baby girl with fiancé Ken William Smith last April and went back to work earlier this year.

Having said: Tina Dahley had to deny she was pregnant after fans speculated about her appearance following a recent episode of the BBC’s Breakfast programme.

Tina shared a glamorous photo in a black dress, writing: ‘When presenting the BBC breakfast service a few months ago I was alerted (as happens in the internet world) to the fact that people were speculating about whether or not I was pregnant again.

“The answer is no, I am not expecting a second child!” But I had a baby, and his body didn’t ‘come back’ right away. In fact, it may never “come back” again and be the same as it was before giving birth but that’s normal too!!! “

Tina continued, “I want to have the body I once had and recently rekindled my relationship with fitness, so we’ll see how that goes — but if that was the cost of having a little piece of my heart around the world every day, I’d do it a thousand times over.” 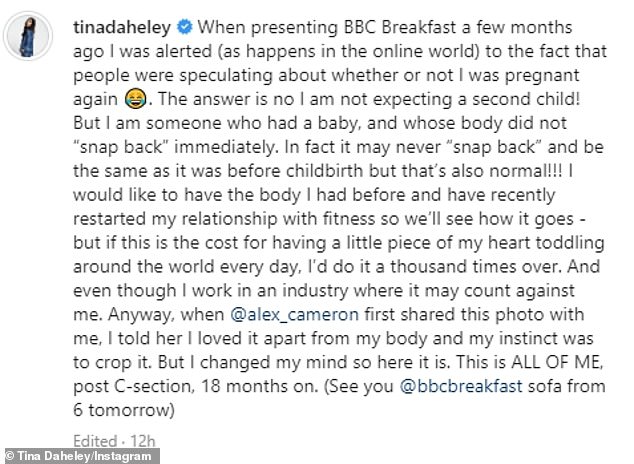 Candid: The presenter, 41, took to Instagram on Friday to discuss the ordeal saying “her body didn’t bounce back right away” as she defiantly said: “The answer is no, I’m not expecting a second baby!”

“And even though I work in an industry where that might be against me.”

Tina shared a photo of herself looking gorgeous in the black dress, and explained that she “loved the ‘snatch’ off my body,” explaining that her “instinct was to cut it.”

“But I changed my mind so here it is,” Tina proudly declared. That’s all for me, post-cesarean section, 18 months later. (See you @bbcbreakfast from 6 tomorrow).

Her fans were quick to support her, writing with one: “Oh my gosh, what an amazing, beautiful body!! I love this photo and your words so much!”

Read:‘She had an aura’ – five photographers on capturing the Queen | Photography 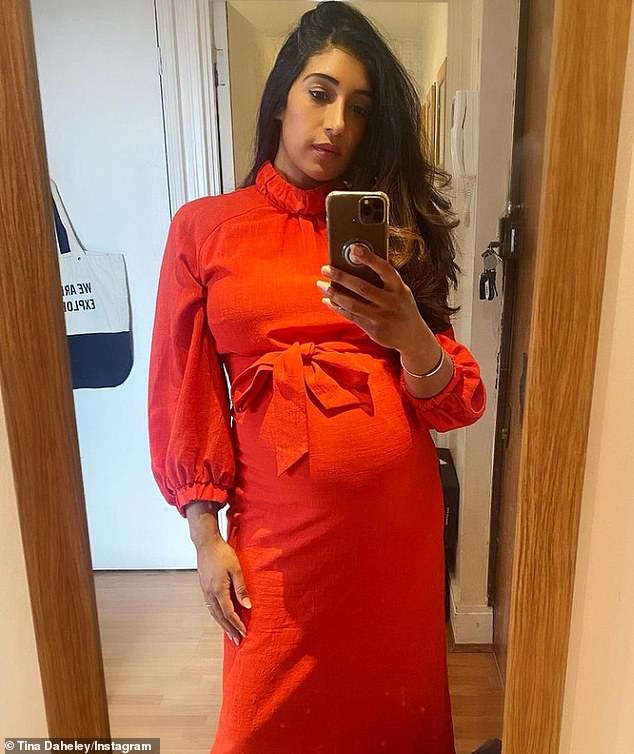 Another agreed: “Your body is a machine and the greatest machine you will ever own, I love your gratitude.”

A fourth said: ‘An incredibly intelligent, funny and talented woman, the rest of her hype is rubbish and yet she is so exhausting. More power to you goddess. 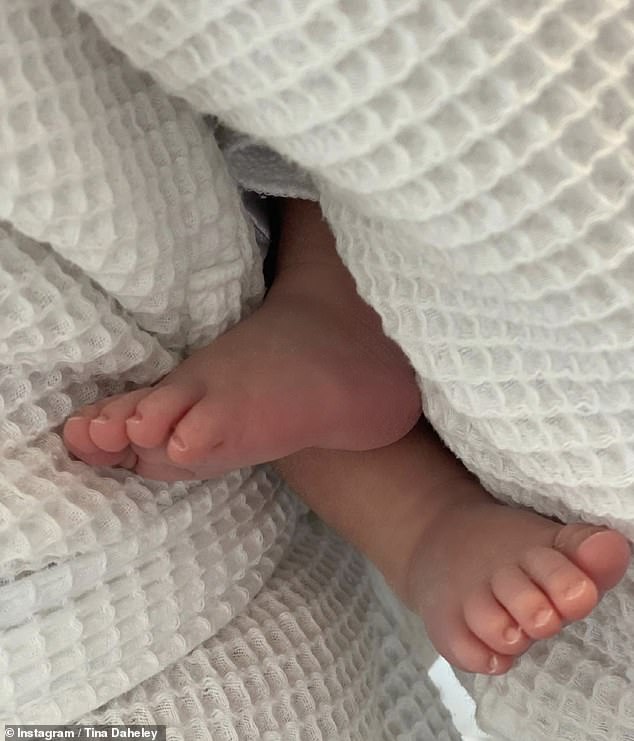 ‘Upside down in love’: BBC News presenter shared a sweet snap of her newborn daughter’s feet as she shared the happy news with her followers last April

The BBC News presenter announced the news by posting a sweet snap of her newborn daughter’s feet on Instagram.

Tina shared the happy update with her followers, captioning it: “Head over heels in love with our sweet baby girl.”

Tina’s adorable photo showed her newborn baby’s toes popping out while she was dressed in a soft flannel gown.

The new mom was soon filled with well wishes and congratulations from her co-workers, with Susannah Reid writing, “What great news.” 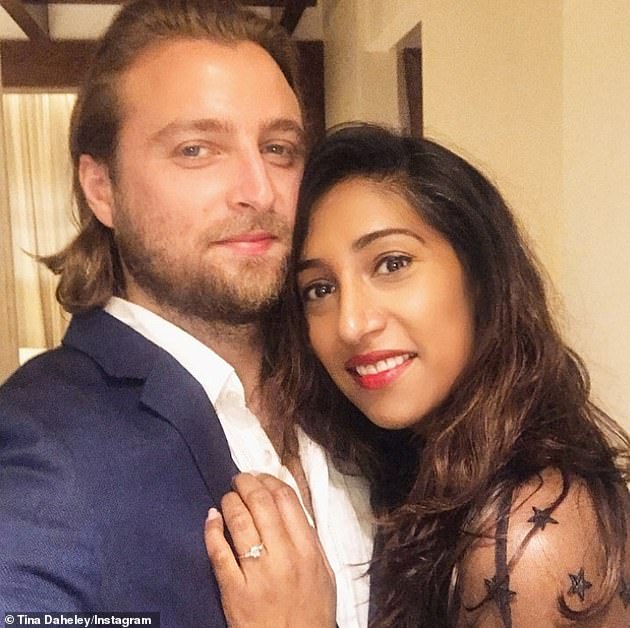 Inseparable: Tina confirmed her engagement to Kane in January 2018 by sharing a photo of her sparkling ring (pictured)

Sarah Cox wrote: “Ahhhhh yeyyyyyyyy sending you all the love 3” while Davina McCall shared her well wishes when she wrote: “Oh Tina so happy for you.”

The baby’s arrival also came just weeks after Tina revealed that she and Ken had moved into the house and started a “deferred renovation project”. 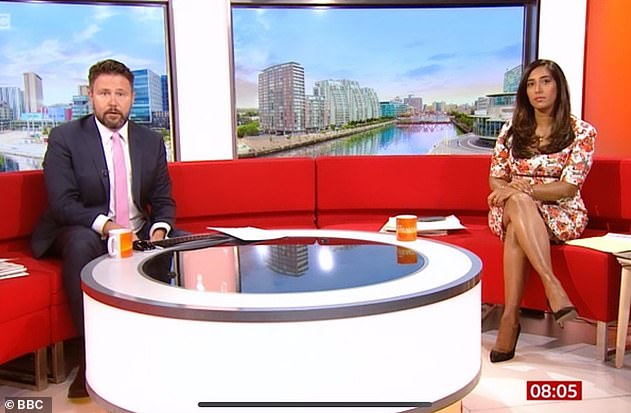 Here she is: Tina has become a staple on the BBC’s breakfast couch alongside the likes of Charlie Staite, Naga Monchetti, Louise Minchin and John Kay (pictured)

“Everyone settled into our temporary newborn haven in the ninth month of pregnancy!” said Tina, who shared a snap on Instagram on April 6!

I can’t believe we started a delayed renovation project and moved into the house just days before our little one was born, but thanks to the incredible support of friends and family (and the fancy roof over our heads) we somehow made it through.

Tina announced that she was expecting her first child back in December 2020 when she shared a photo of her baby bump and revealed that she was more than five months pregnant.

In a caption to the post, she wrote: “Some exciting news to share! Beyond thrilled to welcome a new addition to our family in Spring 2021. Thank you @bbcadio2 family for all of your lovely messages this morning.

While the presenter keeps her private life away from social media, her fiancé Ken occasionally appears in sporadic posts – including Tina’s confirmation of the couple’s engagement via Instagram in January 2018.

Tina confirmed her engagement to long-term partner Kane in January 2018, sharing a picture of her sparkling ring on Instagram.

After reading the news on Radio 1’s breakfast show for several years, Tina covered events such as the pre-election debate and headlined her first Panorama programme – about the Manchester bombing. 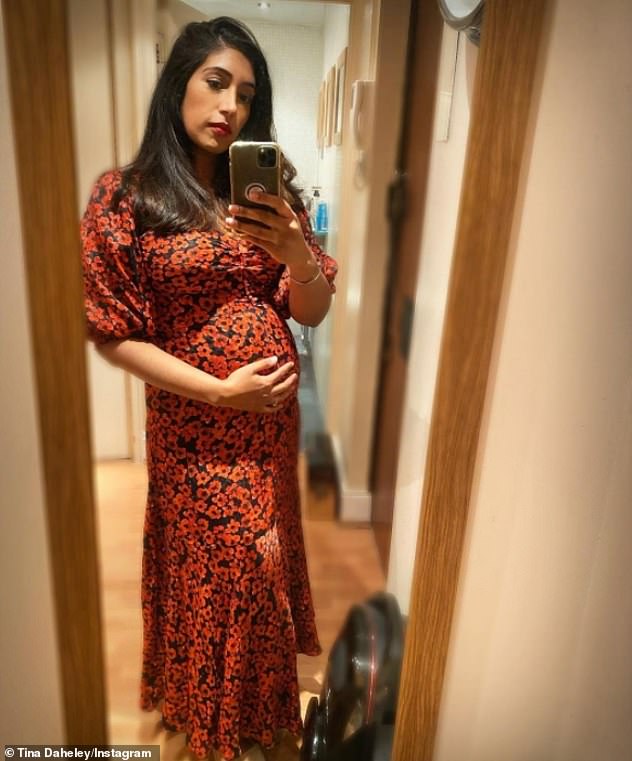 Happy news: Tina confirmed that she is expecting her first child with fiancé Ken in December 2020

Since then she has become a fixture on the BBC Breakfast Couch alongside the likes of Charlie State, Naga Monchetti, Louise Minchin and John Kay.

Speaking in 2018, the anchor told Harper’s Bazaar that she “worked ridiculously hard” to get where she is after her parents told her she’d have to work harder than her white contemporaries.

“I was doing the news on BBC3, finishing at midnight and then coming in for breakfast, which goes back to what my parents said about having to work two or three times,” she explained.

Tina is the daughter of first generation immigrant parents of Indian descent, who themselves grew up in Nairobi, Tanzania.

She added that gender and class also play a role in the lack of diversity in the media, saying, “There’s no point — I say it like I say my friends — too many privileged people of color in prominent roles.”

This is not really representative. As I progressed in my career, I realized that there weren’t many people out there like me. I am very working class. 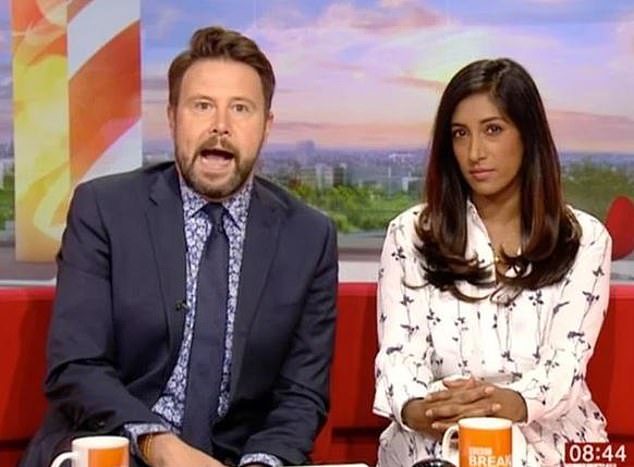 Powerful: Speaking in 2018, the presenter told Harper’s Bazaar that she’s ‘worked ridiculously hard’ to get where she is after her parents told her she’d have to work harder than her white contemporaries (pictured with Jon Kay on BBC Breakfast)

Your Old Tech Doesn’t Belong in the Trash. How to Recycle Outdated Gadgets for Free

‘Parts of town are just destroyed’: the ghost shops of Kent in pictures | Photography

Helena Bonham Carter jokes about 21-year age gap with boyfriend: ‘We say I’m siphoning off his youth at night’