In June 2022, NHS England (NHSE) and the National Institute for Health and Care Excellence (NICE) launched the Innovative Medicines Fund (IMF). The £340 million fund will give non-cancer patients access to cutting-edge treatments that are still uncertain at the time of launch and promotes the UK as an attractive launch destination. The IMF was launched a month before the NHS moved to a systems approach, through the formal implementation of Integrated Care Systems (ICSs).

“Any focus on improving patient access to innovative medicines – especially for rare and ultra-rare diseases – is most welcome,” said Sean Richardson, VP and general manager UK & Ireland, Alexion at a recent pharmaphorum webinar.

The IMF is a new opportunity for patients outside the oncology space to access treatments when the evidence base is uncertain, if those treatments have the plausible potential to be cost-effective in time. It builds on the Cancer Drugs Fund (CDF), an early access mechanism for many cancer medicines in England.

The opportunity is welcomed by the rare and ultra-rare disease community as their situation remains difficult. A rare disease is defined in the UK as a condition that affects less than 1 in 2000 people, but collectively rare diseases are not rare. One in 17 people is affected by a rare disease, but about 95% of the between 7,000 and 10,000 rare diseases have no effective treatment. Even when treatments are developed, they come with great uncertainty.

“The IMF can help resolve the uncertainty. Rare and ultra-rare diseases increase uncertainty. There are small patient numbers, uncertainties in the cost-effectiveness model and clinical pathway, and often a lack of comparative data. It’s the perfect storm,” Richardson said.

The IMF is also a positive signal to industry in a competitive global life sciences market. “So much has happened in the field of rare diseases in recent years, including in the field of the IMF. The United Kingdom has the ambition to be a leader in the life sciences. The potential is there,” said Richardson.

Delivering on the IMF’s promise

NHSE and NICE have crystallized the lessons of the CDF and adapted them for treatments beyond cancer into eight principles for the IMF (Figure 1).

“When you look at all the new technology coming out, there’s so much heterogeneity, so it’s important that there’s flexibility in what kind of data is needed,” Richardson added.

The IMF’s success will come from early involvement and ongoing dialogue. “We want to talk to companies as early as possible. It’s not just one conversation, either,” Pinwill said. Companies can participate through commercial operations at NHSE or through NICE’s scientific advisory service and the Office for Market Access (OMA).

For a smooth transition to routine commissioning, NICE needs to focus on the original uncertainties in reassessment. Richardson said: “I want to argue that when NICE looks again (during the reassessment), they don’t expose other uncertainties that weren’t identified in the beginning.”

Harnessing the potential of the IMF is also about the bigger picture. Richardson noted: “The IMF could help support the delivery of the rare disease framework that prioritizes access to specialized care and treatment. I am very happy that there are so many other policies, such as the Innovative Licensing and Access Pathway (ILAP), but they all have to work.”

There will also be challenges. “Don’t underestimate the costs and resources of executing an agreement,” said Richardson. Those costs are internal and reflect the fees companies must pay for at least two NICE valuations.

The IMF may not be a realistic option for all companies. “If the treatment turns out not to be cost-effective, there is a risk that the company will have to provide the drug forever. That might be a bridge too far for some,’ Richardson remarked.

Should more than £340 million be required, companies will have to pay back collectively to keep the budget under control. That can also be a bit daunting.

More work is needed to achieve widespread uptake and ensure that all eligible patients benefit, even with a NICE endorsement, be it a recommendation for use through the IMF, CDF or routine commissioning.

“We need system readiness,” McFarlane said. “The problem is getting the drug into the NHS. Sometimes the runway is not built or has holes in it,” she added. The result can be a low and slow recording. “It could take four years before it is accepted. Four years is too long,” she explained.

System readiness is where ICS comes into play. “If we have all the right players, identified the right patient cohorts, the right path, as well as the positive NICE recommendation and the right price, we can prevent innovations from stalling,” said Hamilton.

“Innovation is our space,” said Hamilton. “As a life sciences company, if you are interested in landing a new technology, we can orchestrate the conversations and clarify the roadmap for the industry. We are the front door.”

Working with AHSNs can help prepare the ICSs, but there is still work to be done after the NICE recommendation. Asghar reflected on his experience of including NICE-approved PCSK9 inhibitors to lower cholesterol.

“We did a lot of work locally to look at the trail,” explains Asghar. “We had two acute provider sites with lipid clinics run by lipidologists, so we decided that they would manage access.”

Data intelligence was crucial to help investigate whether this approach to implementation worked. “Six months later we looked back. Only one of the sites performed in line with expectations,” said Asghar. Knowing this led to action. “We also had cardiologists prescribe,” Asghar added, “Without data intelligence, we would have thought our work was done.”

There is a reality check and an opportunity for collaboration between industry and the NHS. “When I think about what ICS needs and how the industry can help, data intelligence is key. We don’t always have the resources for that analysis within the ICSs. It is a force that the industry can bring,” Asghar said. 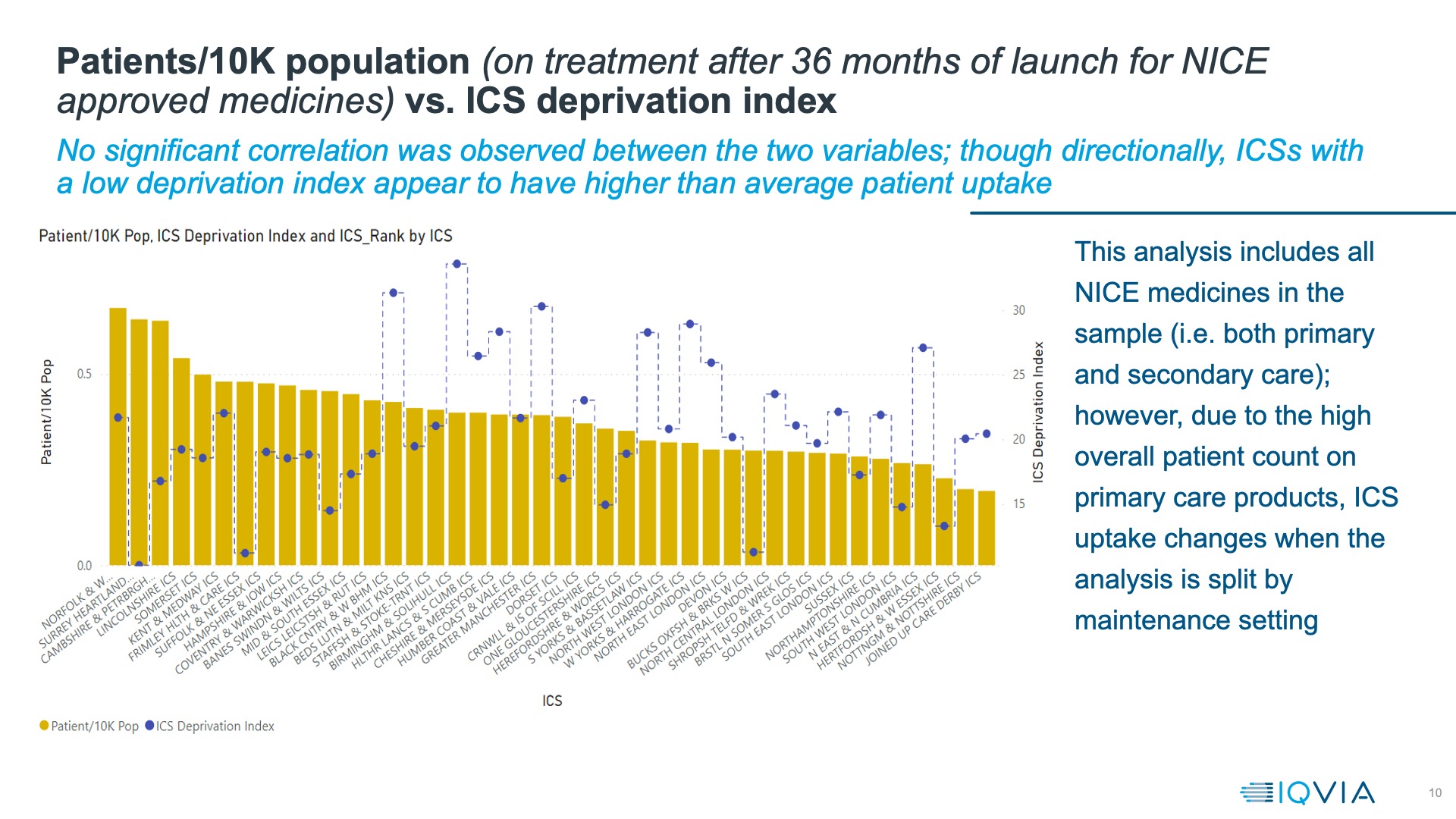 This means that there is alignment between the objectives of ICS and better acceptance of NICE-approved medicines. Asghar noted, “We need to better coordinate health and care, improve the health of the population and reduce health inequalities.” There is evidence that deprivation increases the likelihood of having more than one long-term condition at a time and that the most disadvantaged fifth of the population develops multiple health problems 10 years earlier than those in the least disadvantaged fifth.

McFarlane adds, “Some of the perverse incentives with the payer-provider model have been ironed out in theory. ICSs could be the catalyst for improving local adoption.”

That change in perspective means that savings matter no matter where they are made. Asghar explained: “If there was an opportunity in the past to save on social care later on, the answer from some would be: we don’t care, we are only responsible for the drug budget. But now the stars and planets are gradually aligning to create a much better environment for implementing new innovative treatments.”

However, block budgets can be a challenge. Asghar said: “Block contracts can hinder the adoption of innovative technologies because they are not really covered and there is insufficient or no additional funding for emergencies.”

Collaboration is key to the success of the IMF and the widespread adoption of NICE-approved treatments.

Industry and others can bring in data intelligence expertise, helping ICSs identify the right patients for NICE-approved treatments. Next comes the path. Even then, the recording is not ‘done’: data intelligence can provide improvements to the runway and ensure the correct landing.

Panelists agree that approaching the IMF and using NICE-approved treatments with a ‘one-mission’ approach is the best way to ensure that the promise of innovative treatments is delivered. “We need a one-mission approach, just like we had with COVID. That showed that collaboration can produce results,” McFarlane concluded.

Please contact Manesha Banwait, Marketing Manager, IQVIA if you would like additional information regarding the webinar or other IQVIA services.

Cervical cancer: Woman diagnosed with cancer after thinking it was endometriosis