An irate commuter has shared a video of him having to yell out at a couple to stop them having sex in the back of a bus.

In a video shared on Facebook last weekend, we see a man and woman romping in the back seat of a commuter bus, reportedly on Melbourne’s 902 Chelsea-to-Airport West route.

Stunned passengers either watch in horror, or pretend it’s not happening, until a horrified commuter confronts the couple and yells, “Listen brother, you’re not fucking on the bus, mate.”

The couple later yells back that the man performing the deed is homeless and has autism, in an apparent attempt to excuse their display of affection. 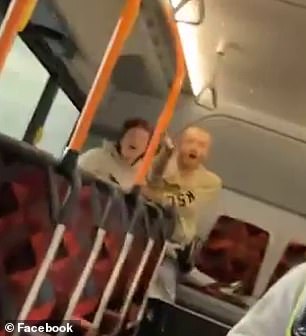 A Melbourne couple (right) has been recorded getting hot and heavy (left) on a bus. When confronted with why the couple performed the lewd act, they blamed autism and homelessness

The angry passenger doesn’t stick to their reasoning.

“I don’t care if you have autism, it doesn’t mean you’re on the bus.

“Go fuck in the park or something…”

“There’s a time and place, don’t blame him for complaining, nobody wants to see kids out there who are probably on that bus too and using his autism as an excuse,” one wrote.

“Dude put him right in his place,” commented another.

Someone else said they also had autism and ‘never done anything like this in my life’.

In Australia, a person can be criminally convicted and given a prison term of up to two years for intentional or obscene exposure.